Heroes of the Storm, like all esports, has a unique equalizing effect. Pro players have access to the exact same characters and in-game tools as anyone. To the untrained eye, a Varian, Chromie, or Medivh looks exactly the same in a quick match as they do on the Blizzcon stage. That said, what makes the HGC truly special is the group of hard-working, passionate gamers fighting for the right to keep pursuing their dreams. Over the next few weeks, we’ll be taking a closer look at the men on the other side of the screen. It’s time for you to really get to know the Roll20 Esports Heroes of the Storm team. Check out previous interviews at the end of this article.

Today we continue our series with Roll20’s support player, Buds. A promising young player in 2016, Buds’ star has rapidly risen with his team’s success in the HGC. He’ll offer insight into how the team builds their unique compositions, his experience competing with Dyrus, and how Roll20 would fare in a zombie apocalypse.

Buds first appeared at the top of the competitive HOTS scene on Team Name Change alongside his longtime friend Justing. However, if Roll20 fans go back and watch some of TNC’s matches, they won’t be able to find Buds in the support role. Instead, his original role in Heroes was that of a ranged/flex player. Leading up to the initial HGC qualifiers, TNC disbanded and the players scattered to various rosters within the NA scene. Buds, however, was determined to find a roster that would allow him to keep playing with Justing. “We jumped on and off a lot of teams…” he explained, “but couldn’t really find anything we liked.” A few weeks before the qualifiers began, the pair received word that Chu8 was putting a team together with Glaurung for the HGC. The roster specifically needed a tank main and a support. Justing reached out to Glaurung and requested a tryout for himself and Buds. With only a few days before their tryout, Buds had to transition to a brand new role.

“Before I even knew about joining a team as a support, I was talking with Justin on how I wanted to make the swap to playing support,” said Buds. “The transition was really smooth and worked out quite well because about a week later Glau’s team was looking for the support and tank, so I just spammed games on support and watched some pro matches and just tried to learn the basics of each support hero I could.”

It took a few weeks to iron out the kinks, but eventually Buds and crew qualified for the HGC. “Sounds silly, but [it meant] pretty much everything. For the longest time I have wanted to be professional at a game and qualifying for the HGC finally feels like I’ve accomplished that.” Becoming a pro gamer also helped Bud’s family understand his chosen profession. “My family has always been supportive with whatever I choose to do. My dad was skeptical at first, but when HGC started he got into it right away. I actually saw him browsing the heroes subreddit the other day.” He added,  “my parents and my brother pull up the stream and watch almost every weekend, it’s pretty sweet how supportive they are about it”

Although newer to the support role, Buds has plenty of insight to share on how his team works specific healers into their team compositions. Roll20 has become infamous for their unique comps, and each has a suite of supports that pair perfectly with that gameplan. He explained, “when we do the Medivh/Diablo, we like to have Malfurion with it because the Diablo flip into Malf root is good [before level] 10… They also have ults that synergize really well like Leyline, Apoc, and Twilight Dream [which have] really good wombo potential.” 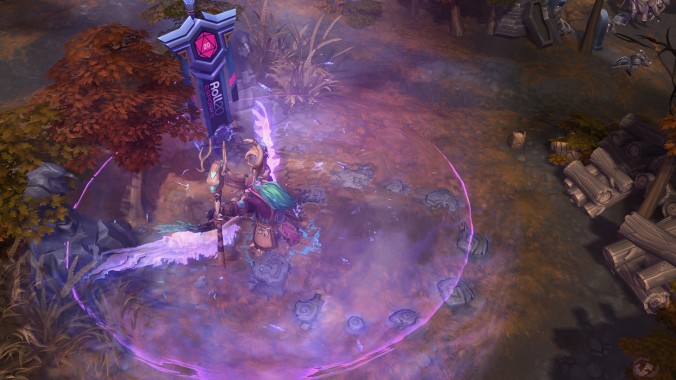 We saw the team unveil a few compositions last week which included HOTS’ latest warrior, Garrosh, but Buds has more ideas in store for the hero. “Another easy combo would just be Garrosh, Uther, and Nazeebo.  The Garrosh throw into Uther stun is just an easy combo to execute, then throw a zombie wall over it.”

Being a pro isn’t all theorycrafting and HGC matches. Buds’ new career has provided several unique opportunities, including the chance to travel the world. “The coolest thing I’ve gotten to do so far would probably be the traveling. Being able to travel around the US and to Europe to play is pretty crazy. On top of that, traveling to somewhere I’ve never been to play on LAN is awesome. The best part of being a pro is playing on stage.”

Buds is also the only support in the HGC to have healed for a former professional League of Legends NA champion. At the end of HGC Phase 1, Roll20 (Team 8 at the time) invited former Team Solomid star, Dyrus, to participate in an official match. For Buds, it was a surreal experience.

“It was pretty awesome to be able to play some games and just chat with the legendary Dyrone. I remember watching him play way back in the LCS, which was the first esport I’ve ever watched, and thinking how awesome being a pro gamer would be. I never would have thought that i would be playing scrims and a competitive match with him. We got to show him the competitive side of the game which he told us he enjoyed a lot, he also just liked the game in general. He was surprisingly good at the few heroes he could play and did really well in the HGC match against No Tomorrow…hitting insane tongues [on Dehaka]. He was a really friendly and laid back guy, I had a blast playing with him.”

The Man Behind the Heals

Roll20 is a team known for its synergy, but Buds is not sure that would translate outside of esports. For example, he thinks the team would fair rather poorly in a zombie apocalypse. “We would be looking for supplies and come across a pack of zombies and Glaurung would do something that he likes to do in scrims, be super aggressive and be like ‘I’m testing limits!’ [Then he] gets infected and doesn’t tell us, turns into a zombie and bites us all.”

Buds sees his role on the team as a support both in game and in team communication. His position requires him to “be friendly, try to have good communication, staying positive and keeping morale up, trying my best in game and always looking to improve my play to better the team.”

He is appreciative of everyone who supports Roll20, wanting to thank everyone who has cheered for the team and supports them. “We’ll do our best and try to make NA proud,” he said.

In closing, Buds had one last thought to share with his fans who want to get to know him a bit better.

“Not much else to know about me besides I really like cereal.”

Thank you so much to Buds for taking the time for this interview, and to Roll20 for the opportunity to chat with these awesome players. Be sure to follow him on Twitter, and keep an eye on Roll20 Esports (and, you know, me) for upcoming interviews with the rest of the team.

Want to show your support for Roll20? Head to the R2E shop and pickup an official Roll20 Esports jersey!

Check out our previous interviews: